The interpreter accepts commands interactively through the console.

Basic math, as you would type it on a calculator, is usually a valid command in the R language:

Question
Why is the output prefixed by [1]?
Answer
That’s the index, or position in a vector, of the first result.

A command giving a vector of results shows this clearly:

The interpreter understands more than arithmatic operations. That last command told it to use (or “call”) the function seq().

Most of “learning R” involves getting to know a whole lot of functions, the effect of each function’s arguments (e.g. the input values 1 and 10), and what each function returns (e.g. the output vector).

A good place to begin learning R is with its built-in mathematical functionality.

Sandwiching something with ( and ) has two possible meanings.

Group sub-expressions by parentheses on an as-needed basis.

Call functions by typing their name and comma-separated arguments between parentheses.

When you start a new session, the R interpreter already recognizes many things, including

To reference a number or function just type it in as above. To referece a string of characters, surround them in quotation marks.

Without quotation marks, the interpreter checks for things named ab.cd and doesn’t find anything:

Question
Is it better to use ' or "?
Answer
Neither one is better. You will often encounter stylistic choices like this, so if you don’t have a personal preference try to mimic existing styles.

You can expand the vocabulary known to the R interpreter by creating a new variable. Using the symbol <- is referred to as assignment: the output of any command to the right of <- gets the name given on its left.

You’ll notice that nothing prints to the console, because we assigned the output to a variable. We can print the value of x by evaluating it without assignment.

Assigning values to new variables (to the left of a <-) is the only time you can reference something previously unknown to the interpreter. All other commands must reference things already in the interpreter’s vocabulary.

Once assigned to a variable, a value becomes known to R and you can refer to it in other commands. 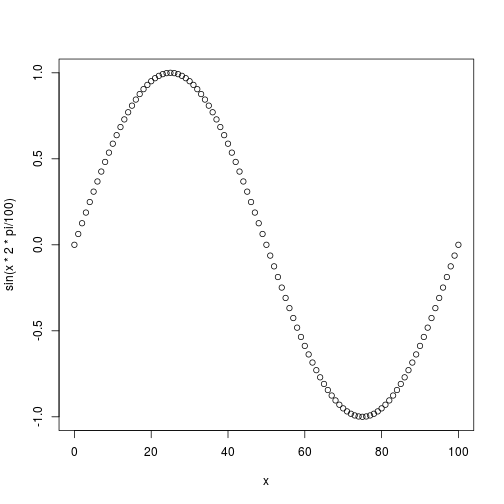 In the RStudio IDE, the environment tab displays the variables added to R’s vocabulary in the current session.

The console is for evaluating commands you don’t intend to keep or reuse. It’s useful for testing commands and poking around. The editor is where you compose scripts that will process data, perform analyses, code up visualizations, and even write reports.

These work together in RStudio, which has multiple ways to send parts of the script you are editing to the console for immediate evaluation. Alternatively you can “source” the entire script.

Open up “worksheet-1.R” in the editor, and follow along by replacing the ... placeholders with the code here. Then evalute just this line (Ctrl+Enter on Windows, ⌘+Enter on Mac OS).

Our call to the function seq could have been much more explicit. We could give the arguments by the names that seq is expecting.

Run that code by moving your cursor anywhere within those two lines and clicking “Run”, or by using the keyboard shortcut Ctrl-Return or ⌘ Return.

Code readability in the editor cuts both ways: sometimes verbosity is useful, sometimes it is cumbersome.

The seq() function has an alternative form available when only the from and to arguments are needed.

The : operator should be used whenever possible because it replaces a common, cumbersome function call with an brief, intuitive syntax. Likewise, the assign function duplicates the functionallity of the <- symbol, but is never used when the simpler operator will suffice.

How would you get to know these properties and the names of a function’s arguments?

How would you even know what function to call?

We will use the function read.csv() that reads a Comma-Separated-Values file. The essential argument for the function to read in data is the path to the file, and optional additional arguments that adjust how the file is interpreted.

Additional file types can be read in using read.table(); in fact, read.csv() is a simple wrapper for the read.table() function having set some default values for some of the optional arguments (e.g. sep = ",").

Type read.csv( into the console and then press tab to see what arguments this function takes. Hovering over each item in the list will show a description of that argument from the help documentation about that function. Specify the values to use for an argument using the syntax name = value.

Question
Is the header argument necessary?
Answer
No. Look at ?read.csv to see that TRUE is the default value for this argument.

You can specify what indicates missing data in the read.csv function using either na.strings = "NA" or na = "NA". You can also specify multiple things to be interpreted as missing values, such as na.strings = c("missing", "no data", "< 0.05 mg/L", "XX").

After reading in the “animals.csv” and “plots.csv” files, let’s explore what types of data are in each column and what kind of structure your data has.

Compound objects, built from one or more of these data types, or even other objects.

Vectors are the basic data structure in R. They are a collection of data that are all of the same type. Create a vector by combining elements together using the function c().

All elements of an vector must be the same type, so when you attempt to combine different types they will be coerced to the most flexible type.

Lists are like vectors but their elements can be of any data type or structure.

A factor is a vector that can contain only predefined values, and is used to store categorical data. Factors are like integer vectors, but posess a levels attribute that assigns names to however many discrete categories are specified.

Use factor() to create a vector with predefined values, which are often characters or “strings”.

The str function notes the labels, but prints the integers assigned in their stead.

Data can be stored in several additional data structures depending on its complexity.

Of these, the data frame is far and away the most used.

Data frames are 2-dimensional and can contain heterogenous data like numbers in one column and a factor in another.

It is the data structure most similar to a spreadsheet, with two key differences:

Creating a data frame from scratch can be done by combining vectors with the data.frame() function.

There are several functions to get to know a data frame:

Parts of an Object

Parts of a data structure are always accessible, either by their name or by their position, using square brackets: [ and ].

Parts of an object may also have a name. The names can be given when you are creating a vector or afterwards using the names() function.

Question
This use of <- with names(x) on the left is a little odd. What’s going on?
Answer
We are overwriting an existing variable, but one that is accessed through the output of the function on the left rather than the global environment.

For a multi-dimensional array, separate the dimension along which a part is requested with a comma.

It’s fine to mix names and indices when selecting parts of an object.

There are multiple ways to access several parts of an object together.

The $ sign is an operator that makes for quick access to a single, named part of an object. It’s most useful when used interactively with “tab completion” on the columns of a data frame.

A logical test applied to a single column produces a vector of TRUE and FALSE values that’s the right length for subsetting the data.

Functions package up a batch of commands. There are several reasons to develop functions in R for data analysis:

Writing functions to use multiple times within a project prevents you from duplicating code, a real time-saver when you want to update what the function does. If you see blocks of similar lines of code through your project, those are usually candidates for being moved into functions.

Anatomy of a function

Like all programming languages, R has keywords that are reserved for import activities, like creating functions. Keywords are usually very intuitive, the one we need is function.

We’ll make a function to extract the first row of its argument, which we give a name to use inside the function:

Note that z doesn’t exist until we call the function, which merely contains the instructions for how any z will be handled.

Finally, we need to give the function a name so we can use it like we used c() and seq() above.

Question
Can you explain the result of entering first(counts) into the console?
Answer
The function caused an error, which prompted the interpreter to print a helpful error message. Never ignore an error message. (It’s okay to ignore a “warning”.)

The R interpreter’s “focus” flows through a script (or any section of code you run) line by line. Without additional instruction, every line is processed from the top to bottom. “Flow control” is the generic term for causing the interpreter to repeat or skip certain lines, using concepts like “for loops” and “if/else conditionals”.

Flow control happens within blocks of code isolated between curly braces { and }, known as “statements”.

The keyword if must be followed by a logical test which determines, at runtime, what to do next. The R interpreter goes to the first statement if the logical value is TRUE and to the second statement if it’s FALSE.

An if/else conditional would allow the first function to avoid the error thrown by calling first(counts).

In this introduction to R, we touched on several key parts of scripting for data analysis.

Perhaps more than most languages, an R script can appear like a jumble of archaic symbols. Here is a little table of characters to recognize as having special meaning.

The . in R has no fixed meaning and is often used as _ might be used to separate words in a variable name.

Use the quadratic formula to find that satisfies the equation .

By default, all character data is read in to a data.frame as factors. Use the read.csv() argument stringsAsFactors to suppress this behavior, then subsequently modify the sex column in animals to make it a factor. Remember that columns of a data.frame are identified to the R interpreter with the $ operator, e.g. animals$sex.

Use the typeof function to inspect the data type of counts, and do the same for another variable to which you assign a list of numbers. Why are they different? Use c to combine counts with the new variable you just created and inspect the result with typeof. Does c always create vectors?

Create a data frame with two columns, one called “species” with four strings and another called “abund” with four numbers. Store your data frame as a variable called data.

The keywords else and if can be combined to allow flow control among more than two statements, as below. Expand the first function once again to differentiate between dat provided as a matrix and as a data.frame. It’s up to you what the “first” element of a matrix should be!

The variable x has a data type of list, so R does not restrict its elements to a particular type as it does for vectors. The result of combining a list and vector is a list, because the list is the more flexible data structure.

If you need to catch-up before a section of code will work, just squish it's 🍅 to copy code above it into your clipboard. Then paste into your interpreter's console, run, and you'll be ready to start in on that section. Code copied by both 🍅 and 📋 will also appear below, where you can edit first, and then copy, paste, and run again.