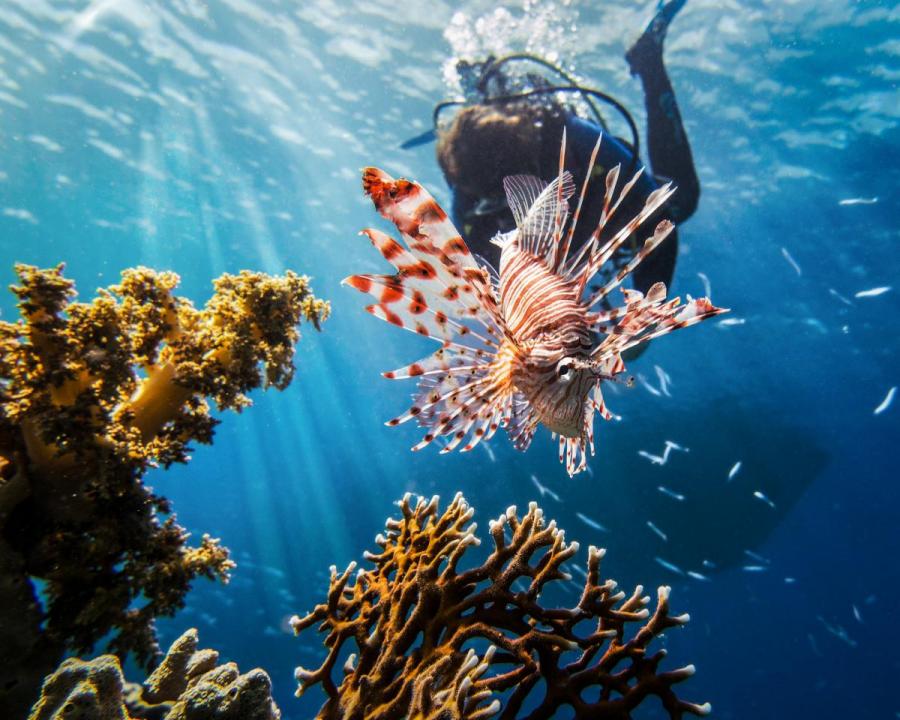 Lionfish are a popular choice for tropical aquariums, but they are incredibly invasive in much of the Western Atlantic. These stripy, spiny fish have devastated coastal ecosystems off the coast of Florida, all the way down to southern Brazil. A 2012 paper described the spread of lionfish across the Western Atlantic “of unparalleled speed and magnitude,” causing a 65 percent decrease in fish biomass between 2004 and 2010.

New research finds social networks – how people interact with each other – can play a huge role tackling environmental problems of this magnitude.

Steven Alexander, a former postdoctoral researcher at the National Socio-Environmental Synthesis Center, or SESYNC, saw the invasion of lionfish around Jamaica as an opportunity to study how people, especially people in the Jamaican government, dealt with the problem.  “We wanted to use this as a case study to illustrate the importance of how people work together to try to solve environmental problems,” Steven said.

Steven is an environmental social scientist, which means he studies how people interact to use and manage natural resources. He visited Jamaica a number of times over three years to collect information on how local and national managers in the Jamaican government and environmental NGOs worked together to come up with a solution to the lionfish invasion.

The invasion came at a particularly bad time for Jamaica and several other nations in the Caribbean, who had agreed to the Caribbean Challenge Initiative in 2008, an ambitious agreement that committed them to protect approximately 20% of their near shore marine area by 2020. Lawmakers signed the agreement around the same time lionfish were spotted in Jamaican waters, and less than one year later, they had surrounded the island and become a serious threat to native fish and corals.

Unfortunately, the Jamaican government later designated many of the coastal areas that lionfish took over as protected ‘fish sanctuaries’ –-strict no-take marine reserves. Lionfish were preying on the juvenile species that the legislation intended to protect. And while the ‘fish sanctuaries’ were put in place to improve the health of the fish populations, in this case the legislation put the brakes on efforts to manage the threat of the lionfish.

“A major obstacle in this situation was the way the legislation for the marine reserves was written,” Steven said, “It said you could not touch any species within the sanctuary – including non-native species such as lionfish.”

The lionfish invasion threatened many parts of the Jamaican economy, which gave the government a strong incentive to resolve the problem. Like other Caribbean nations, Jamaica is very much dependent on marine ecosystems for protein. Tourism is also a major money making business, which means their economy is highly dependent on coral reefs protecting white sandy beaches, as well as the mutualistic relationships between fish species and other marine life that keep the corals alive.

Overcoming this complex-cross-boundary problem required collaboration from many different actors, including fishermen, local marine reserve managers from around the island, non-profits, and government agencies, who would ultimately have to agree to any proposed changes to legislation.

Steven Alexander and his colleagues looked at this problem-solving from the perspective of a social network: who was communicating with whom to get things done? What kinds of social ties would help shepherd the change needed to modify legislation? They set out to research what kind of social connectivity was important to influence governance in this situation. Was it horizontal—meaning social ties between different NGOs or state governments on the same level—or was it vertical—meaning ties between fishermen up through the federal government?

“In this case what we found is the importance of vertical ties between different management organizations and national-level actors, in particular the Jamaican Department of Fisheries,” Steven said. The researchers also found that individual actors who were able to communicate to actors on different levels were critical to coordinating between organizations.

These collaborative, multi-level networks were able to bring the issue of the lionfish invasion to the attention of the Ministry of Agriculture and Fisheries swiftly. In 2012, new legislation was drafted to change the designation of the fish sanctuaries to Special Fishery Conservation Areas, a designation that included special conditions in which fish could be removed or added (if they were invasive or needed for research). And the managers of the local marine reserves all agreed to a synchronized effort to eradicate lionfish from their jurisdictions.

“Changing the designation of the marine reserves from Fish Sanctuaries to Special Fishery Conservation Areas was easier and faster than trying to overhaul the entire national fisheries act, which has yet to be passed despite new drafts put forward over 20 years ago” Steven said. “These social networks that were well-connected to higher-level authorities were critical to implementing this change,” he added.

Managing ecosystems is an inherently difficult task. Ecosystems are complex, and so are the political and social systems that influence them. While Steven’s paper suggests that vertically-integrated networks could accelerate decision-making, he made sure to point out that this isn’t always the case.

A recent review of collaborative environmental governance published in Science by Öjan Bodin found that sometimes trying to include all stakeholders in environmental decision-making can slow down progress, especially if the actors aren’t all in agreement about what the solution should be.

“Consideration of how social networks influence marine reserves is a relatively new avenue of research, and a lot more investigation is needed to determine what kinds of collaborations are important for collaborative environmental governance,” Steven said.

Örjan Bodin summarized the research in this area as follows: “Although commonly advocated, achieving successful collaborations when confronted with complex environmental problems spanning geographical scales and jurisdictional boundaries is an area where substantial knowledge gaps remain.”

And read Orjan Bodin’s recent review of the literature in Science.