Like a scene from the movie Alien, insect parasitoids inject their eggs into unsuspecting hosts, their offspring grow and eat from within, eventually bursting out leaving dead, empty host vessels. These tiny predators, many of them wasps, can have major ecological and economic impacts. For example, wasps in the genus Melittobia attack pollinating bumblebees. Parasitoid wasp larvae feed on the pupae of nesting bees, and their fast reproduction can destroy entire colonies with barely a trace of the preceding carnage. 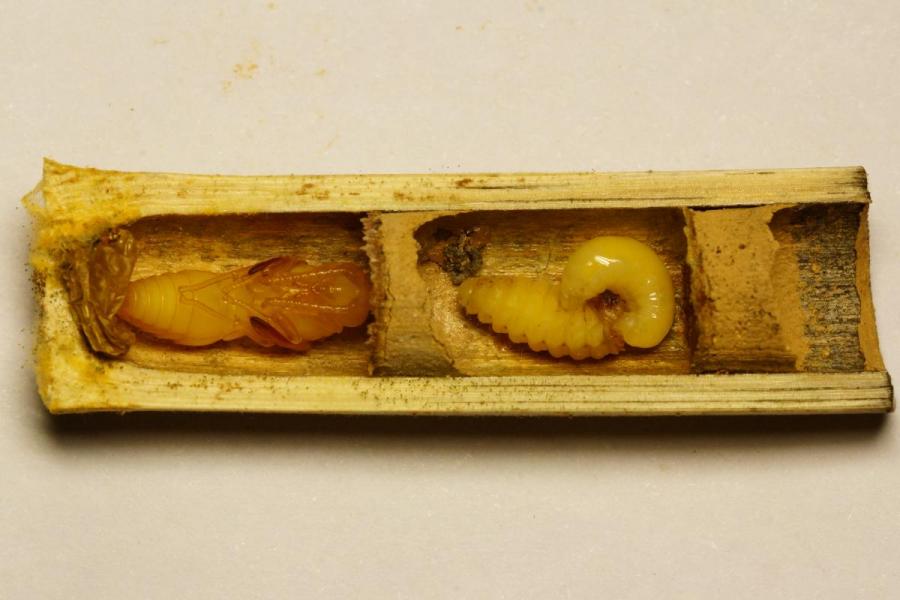 Image depicts a trap nest containing a mason wasp (Antherhynchium flavomarginatum) pupa, left; and a mason wasp larva, right, that has been parasitised by the larva of the wasp parasitoid Lycogaster violaceipennis.

Understanding how parasitoids and hosts interact, and how their interactions change with human influence, is critically important to understanding ecosystems. New research by an international team of researchers finds mathematical models can predict complex insect behavioural changes using a simple description of insect preferences. The research, published in the journal Nature Communications on October 6, was able to predict parasitism rates after deforestation without the need for extensive field data.

“Collecting field data is necessary but expensive, so it’s great to show we can use mathematical models to help focus efforts and make data collection more efficient,” Phillip Staniczenko, Ph.D., lead author and research fellow at the National Socio-Environmental Synthesis Center. “Faced with all the complicated relationships among species, and between species and the environment, it’s amazing we can identify simple patterns that, although not perfect, describe how humans might be affecting parasitism in the same way at different places all over the world.”

They based their findings on host-parasitoid interaction data collected in Ecuador, Indonesia, and Switzerland, at field sites located in a diverse range of ecosystems, including tropical forest and agroforest, temperate meadows and plains, as well as human-modified habitats, such as pasture land and rice paddies. Because parasitoids can attack multiple hosts, interaction data can be combined to build networks that describe, in one mathematical object, the relative rates of parasitism among multiple species at a field site. Given these data, the researchers first designed a way of extracting parasitoid preferences for each host from ecological networks.

“A lot of information about behaviour and species’ responses to the environment is contained in ecological networks, but the question is how to make this information useful for prediction,” Staniczenko said. “Eventually, we realised the answer was interaction preferences, which quantify how much more or less parasitoids attack their hosts compared to a baseline expectation that they attack every time a parasitoid randomly encounters one of its possible hosts.”

Co-author Lewis added, “It would be very difficult and time consuming to study the feeding behaviour of all these species in the field—particularly in high diversity ecosystems like tropical rainforests. Fortunately, it turns out that using interaction preferences might allow us to skip that step.”

"Adding preference data to interaction networks is a big step forward because it allows refinement of the interaction map from a simple list of who-eats-whom to measures that actually provide information on the relative intensity of those interactions.  Preference data are clearly a great boon to prediction and an important target for inclusion in future studies," commented Bill Fagan, Professor and Chair of Biology at the University of Maryland, who was not involved in the project.

Staniczenko and colleagues focused on deforestation, but their new mathematical approach will be valuable for understanding the consequences of many types of human-driven environmental changes. “Interactions among species are the gears that keep the engine of ecosystems working to provide us with resources for our survival. Changes to the environment caused by human activities have disrupted these interactions, and it has previously been difficult to predict changes before it’s too late,” co-author Tyliankis said.

“We’re a long way from predicting the consequences of every human activity,” Staniczenko concluded, “but at least now we know it’s possible.”

Read the article here: Predicting the effect of habitat modification on networks of interacting species.