Believing that all environmental problems are social problems, in 2010, the University of Maryland (UMD) proposed to the National Science Foundation (NSF) to spearhead a synthesis center that would place equal weight on engaging scholars from both the social and the environmental sciences. UMD submitted the proposal in response to NSF’s request for proposals (RFP) for an “Environmental Synthesis Center.” A workshop held the prior year that brought together a diverse group of ecologists, led by the University of Wisconsin’s Steve Carpenter, inspired NSF’s desire for an environmental synthesis center. The report from the workshop recommended NSF move beyond ecological synthesis to embrace knowledge integration from across the environmental sciences. Following the traditional peer-review process of proposals, an external team of scholars and NSF program officers completed site visits with two finalist teams—UMD and Arizona State University.

NSF ultimately selected UMD as the site,  and and the National Socio-Environmental Synthesis Center (SESYNC) opened its doors in the spring of 2011 in Annapolis, Maryland thanks to generous support from NSF and UMD. 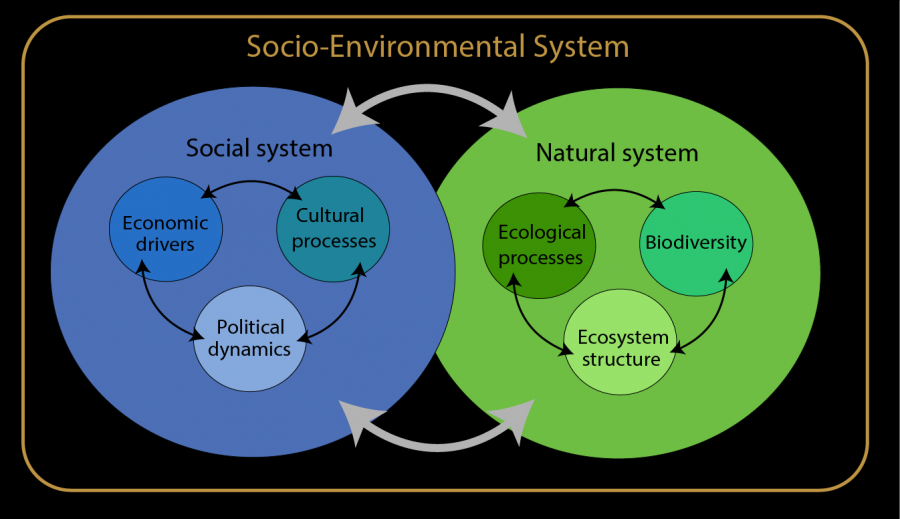 SESYNC's programs and activities aligned with a “theory of change” that included measurable goals assessed using internal developmental evaluations as well as external, independent evaluations by consultants, and evaluations by NSF organized panels.

The Nature of SESYNC Research

SESYNC teams undertook work that spanned the range of “fundamental” to “actionable” research. (See figure below.) Fundamental research provides the needed theory and basic understanding of why social and environmental processes so closely interact, why they operate as a coupled socio-environmental system, and how and why these systems behave and evolve along different paths.  The latter, actionable research, would have the potential to change behaviors, decisions, or practices that enhance nature and human well-being. Thus, SESYNC encouraged teams to engage individuals in the research process who had some interest in or potential use of a team’s findings. These individuals could be governmental or non-governmental representatives, members of the business sector, or part of the resource-user community. 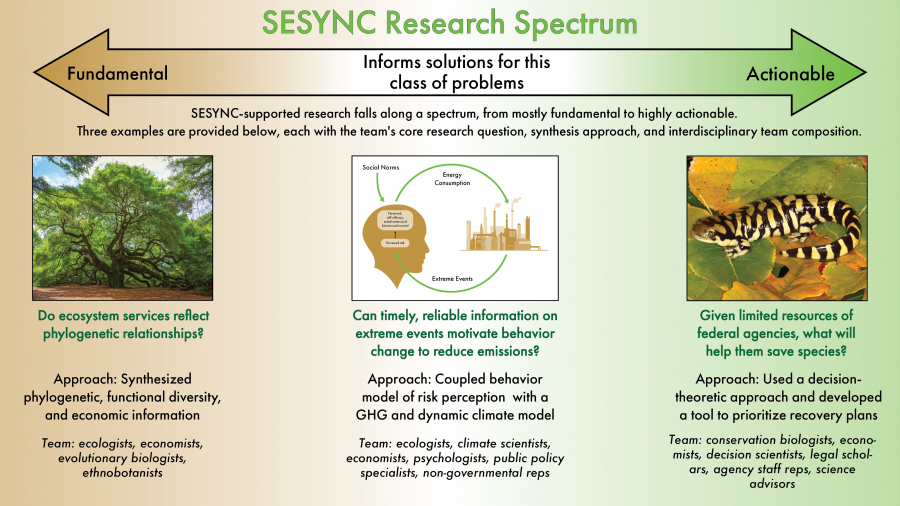 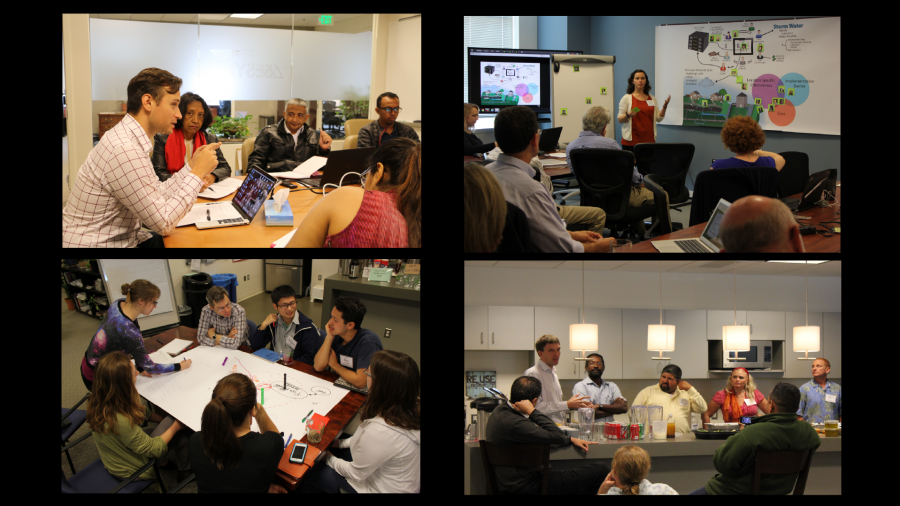 SESYNC recruited staff for logistical and communications support, as well as a group of very talented senior computational scientists whose sole job was to help research teams. At full capacity, a staff of 25 people supported research teams—a level that was only possible because of UMD’s generous contributions to the success of the center. 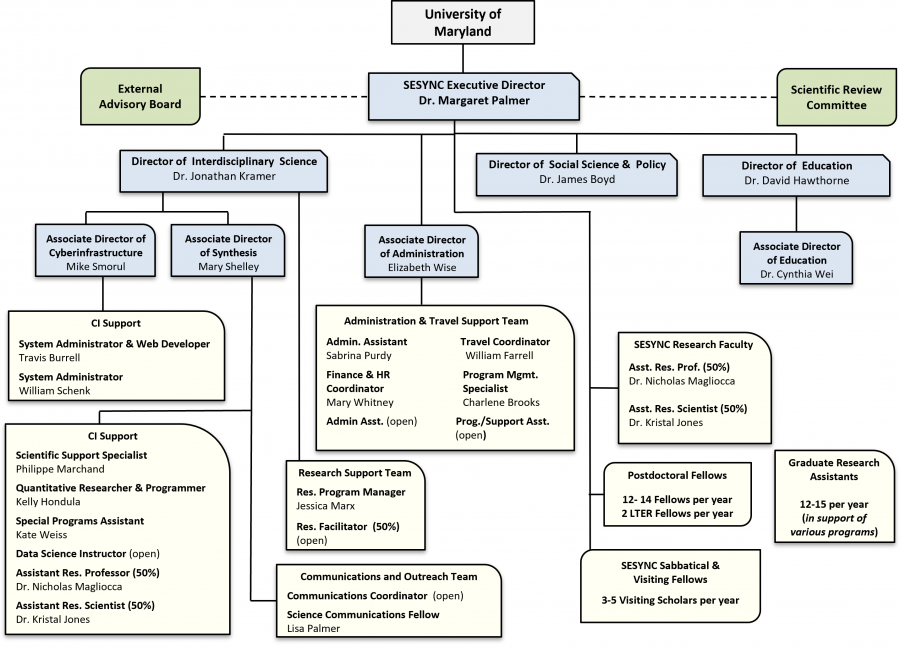 As the above chart implies, SESYNC had a traditional-looking organizational structure for reporting; however, in practice people worked across traditional functional boundaries. For example, SESYNC leadership and communications, computational, and facilitation staff engaged together with researchers to determine the types and level of support needed for each team. Thus, we provided resources and support on a team-by-team basis to best meet each group’s unique needs. During the Center’s formative years, the working culture evolved into this format based on rapid feedback from the community, formative assessment that included both internal and external evaluations, and adaptation of SESYNC processes and programs.

Like all NSF centers, SESYNC underwent NSF-organized external reviews at least every two years. Based on our 4th-year review, NSF invited SESYNC to submit a renewal proposal, and in 2016, we began our second 5-year cooperative agreement with the Foundation. SESYNC programs and activities continued to grow, particularly those for graduate students. PhD-level students and later master’s students received training related to S-E system dynamics, proposal writing, and team research. Many of the PhD students who engaged with SESYNC wrote successful proposals for graduate-student-led team synthesis projects—often resulting in publications that were not associated with their dissertations.

We also continued to grow our Postdoctoral research program, which by SESYNC’s third year, we had bolstered with our Immersion Training workshops. In addition to conducting independent research projects and engaging with their chosen external research mentors, our postdoctoral fellows actively learned about the theories and methodological lenses through which different disciplines approach the study of S-E systems. Fellows were among the most productive SESYNC researchers—both in relation to their own projects and to projects they initiated with other fellows or SESYNC teams.

The research community’s enthusiasm for our NSF Center was strong throughout the life of SESYNC—not only for support received for synthesis projects but for researchers’ time spent at the center. As one SESYNC sabbatical scholar noted in jest:

Over the next several years, SESYNC proved itself to be a hub for stimulating research. With 3–5 teams visiting the center at any given time, 12–15 resident postdoctoral fellows, and SESYNC staff circulating to help teams, it was not unusual for 100+ people to be buzzing around the Center.

As alluded to above, we have extensively assessed SESYNC’s impact on research advances, people, and team processes. While those assessments’ numbers demonstrate the strength of the Center’s impact, perhaps the most interesting and powerful metric is the stories of those individuals who have engaged with SESYNC.

Get to Know Our Resource Types